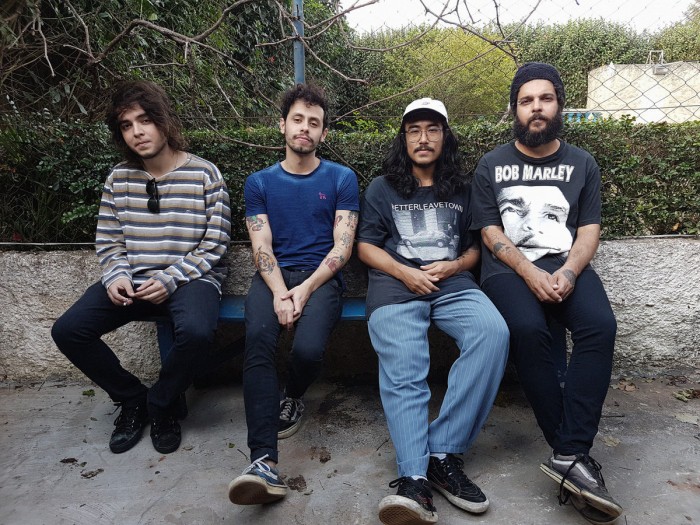 Strawberry Licor is from Itapetininga, a small city in the rich countryside of the Brazilian State of São Paulo. During the 90′s, kids have grown up listening to Independent albums from the US and UK, skateboarding and fighting boredom. One of the things to do was to form a band and have some fun.

After a few personnel changes on the drums, the lineup was established with Yuri Naoto on drums and the above original members. They all know each other from local bands: Luciano played with Pencil Sharpeners and in the legendary Headache; Yuri Naoto plays with Mar de Lobos (whom Strawberry Licor released a split together) and Gabriel Wiltemburg also plays in another band on midsummer madness’ cast, Justine Never Knew the Rules.

Their first EP came out in 2016, “Pupsy” has 6 songs recorded during 2 years. “It was a time-consuming process because of the in-and-out of drummers. It also was self-produced and recorded in different places,” recalls Gabriel.

That’s why later they decided to put out singles: “Megastore” came out in 2017 and “Aim” in 2018. The later is the result of a solitary Gabriel’s afternoon: “One of the drummers had just left, we were not composing nor rehearsing. One day, alone at home after a sad relationship episode, I wrote and recorded Aim. I showed it to the guys the next day and we decided to launch it as it was”, explains Gabriel

For the last two years, they have played some shows such as the opening parties of the Circadélica festival in 2018, and shared the bill with some Brazilian bands like Terno Rei, Wry, Biggs, Victor Brauer.

They have finished recording their debut album entitled “Johnny“, a tribute to Luciano’s father, that recently passed away. The album is scheduled to be released in the beginning of 2019.

“I Feel Like a Kid” is the first single from this album: