aliendawg. (written with lowercase and a dot) is Luiz Spíndola, 21, from a small town in the middle of Brazil called Formosa, nowadays living in Brasília, while Moon Pics is Adriano Caiado, 23, born in Brasília.

They met at a skatepark in Brazil’s D.C. and exchanged links to get acquainted with one another: Adriano used to play in a band called Corvalis while Luiz had his own bedroom project called Transporte Passivo. Their musical tastes matched as well as a mutual interest in DIY production. So, they began to exchange song ideas.

With each one recording in his own room, they decided to release an EP together. “I don’t remember exactly when but we always commented on collaborating”, says Adriano. Luiz adds: “ I sent ‘Give In’ to Adriano because I really like the melodies he can create for vocals”. 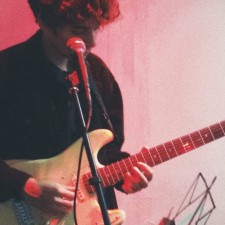 Both songs were recorded using Ableton and Logic, a Behringer microphone, a copy of Fender Stratocaster – all direct on a Vox Pathfinder 15r amplifier as a preamplifier and final tones generated via software; the percussion came out of an electronic drum. Bedroom-pop in its purest form.

Adriano mentions Grouper’s “Cover the Windows and the Walls” albums and William Basinski’s “Disintegration Loops” as influences on these recordings, while Luiz has been listening to a lot of Radiohead, Dot Hacker and Gorillaz, as well as recent discoveries like Preoccupations and Omni.

“Give In / Paper Heart” (mms55) is the first release of aliendawg. and Moon Pics by midsummer madness.
Listen|Buy at Bandcamp
Spotify
Apple Music
Deezer

“a genuine bedroom pop release, introducing two auspicious, bright new minds which show that they have a lot to offer to the world of shoegaze”.
Destroy/Exist

Both projects have their own solo releases that you can check here and here.

Check on this webvideo for “Give In” edited by a friend using images from a short movie from 1949, titled “Begone Dull Care” by Norman McLaren & Evelyn Lambart: