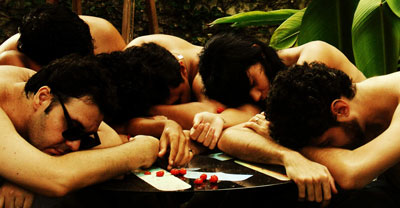 Ampslina formed in Recife (northeast Brazil) in the middle of June 1995 by a group of friends. Luciana (vocals) and Alcides (guitars) met while studying Architecture at University (UFPE) . Henrique (bass) is Alcides brother, the other members were friends and neighbours invited for the adventure. In that time, Luciana was 17, Alcides, 20, and Henrique was 18 years old. The brothers used to play together since the middle 80′s but the idea of a project influenced by Mutantes happened only in University time.

Later in 2004, they rejoined to play at a friend’s party. Surprisingly, some friends asked them to play their own songs. After that, they decided to reunite the band. Ampslina reborn with new purpose and formation. In 2005, Diego Araújo (Sweet Fanny Addams‘ bass player) joined the 3 original members to play drums and so did Lorena in violin and vocals later in 2006. The present formation was completed when Ricardo entered to replace Diego and most recently Rogério assumed programming and guitars after “Curva e Linha” EP recording.

This new Ampslina are still dense, with harmonic confluence between violin and guitar, sweet voices, strong rhythms and electronic effects. After the gap, they feel themselves more mature and musically sensitive, this could be naturally perceived through lyrics and melodies of their new songs. Besides friendship, technological facilities and interfaces such as internet and recording softwares, new members with different influences and tones stimulated A&L to perform and write songs.

Luciana says, “After releasing ‘Curva e Linha’ we didn’t know what or how would be the audience feedback but in fact we trusted the songs. We knew that we had in our hands the result of our differences and not simply a product of any external formula adopted for us.” Actually, there are many differences. Alcides and Henrique’s father is a popular songwriter in Frevo (a tradicional rhythmn from the northeast Brazil). Despite that, both brothers enjoy blues and classical rock. Rogério likes samba-rock and such as Luciana and Lorena also likes alternative rock. But both girls also enjoy fusions, electronic music, jazz, and so on.

Kind of a Mangue Beat, ain’t that?
Could be… but not repeating formulas, like Luciana said: “If Recife has a sound considered multicultural, so we fit where music is completely free to float, where we can mix tones, sound effetcs, to experiment our passions and feelings. But regional rhythms and aspects are not our references, it wouldn’t sound true. We were raised by the concrete but we could not deny our popular culture. It is just a matter of life experience.” 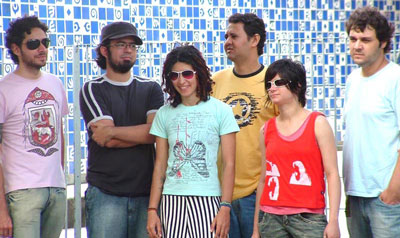 “Curva e Linha” ‘s recording started in March 2007 at Pierre’s studio with a little help from Guilherme Gadelha on keyboards, samplers and effects. It was finished in June 2007 at Proclo’s studio with the help from another friend, Enio Damasceno (from local band Mellotrons) playing synths and eletronic effects. Diego (from Sweet Fanny Addams) helped with mixdown and mastering in a home studio.

In 2008, Ampslina recorded a version of Beatles‘ “Good Night”, taken from the White Album. A brazilian journalist is compiling fan versions from brazilian bands.

In 2008, Luciana left the band. Ju Orange became Ampslina new vocalist and the band build his own recording studio. In this studio they record and relaese the second digital EP entitled “Insone”.

In 2010 Amsplina recorded a version for Yoko Ono’s “Listen, The Snow is Falling”, from the “Wedding Album”. This version takes part on a double tribute album called “Mr Lennon” and “Mrs Lennon” released by brazilian record label Discobertas.

You can listen and download Ampslina EPs at their portuguese page here - http://mmrecords.com.br/ampslina-2/